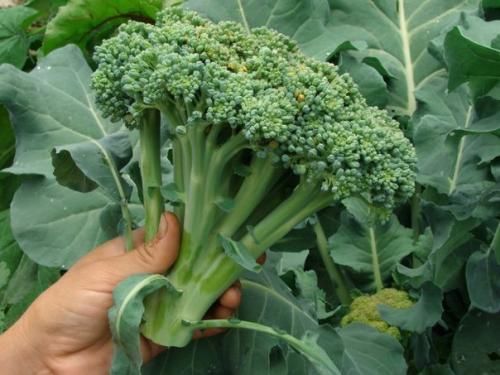 Broccoli belongs to plants of the season and is a very useful dietary product due to it contains trace elements and vitamins.

For the cultivation of cabbage on a country site preferably two types of approaches: ordinary broccoli and asparagus. For the first type is characterized by a thick stalk, on which is formed inflorescences. The second type features a large number of thin stalks.

by the way, If you are interested in the seeds of these exotic cultures, as asparagus, legenariya, kivano, momordica and etc., the contact link

There are several features, to which one should pay attention when grown broccoli. It should be noted, that this plant tolerates both heat, and frozen in contrast, eg, by cauliflower. But, like the rest of her "relatives", She loves light and moisture. Even after the removal of the main head of cabbage sprouts, this continues to produce crops, producing side shoots. So do not rush to pull it out of the ground with roots.

The landing of broccoli sprouts produced as, and seeds. Wherein, if you do not want to trouble themselves with boxes of seedlings, it would be better to sow the seeds in the first week of May directly into the ground. For the preparation of seedlings at home, crates must sow seeds at the end of the first week of March. About a month - half finished seedlings can be planted in the ground.

When transplanting cabbage should take into account soil characteristics. So, Broccoli prefers loose and fertile soil. It should not be planted it in place, where cabbage grown in the past year, Radishes or radish. By putting it in place of potatoes or beans, you can collect a much better harvest.

planting broccoli, We must adhere to the distance 50 cm between the hole. As for fertilizer, then it's all on the owner's discretion. Some gardeners fertilize the soil since autumn, others - just before landing, making it into a pit.

After planting next steps are reduced to a simple regular maintenance. Watering in the broccoli must be at least, than a day. In a strongly hot summer is better to water several times a day, because broccoli is very fond of moisture. Not less than she loves dressing. For this is well suited chicken manure or mullein.

Harvest should be green, without waiting for bloom. The process of collecting the entire stalk is cut together with inflorescences. The first crop is not long and is stored in a low temperature of not more than broccoli prolezhit 2 weeks. The situation is different with the late harvest, that at zero temperature can be kept to 3 months.

Broccoli is a fairly undemanding plant, is uncomplicated with the right care will provide a very good crop.