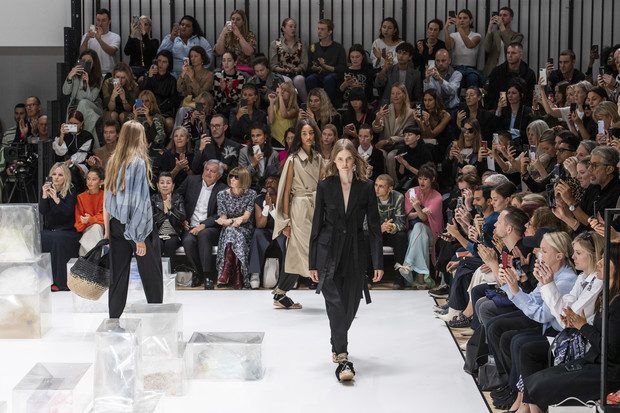 Best of the Best showed their collections under the curtain of Fashion Week in London.

"The new collection I wanted to translate the idea of, how we perceive things, as we look at the texture and how we see jewelry », - said Jonathan Anderson, the basic idea of ​​images spring-summer collection.

JW Anderson Spring-Summer 2020 - interpretation of the ideas and views of the designer, he actively promoted on the podium from the start of creative activity. What we saw at this time? Asymmetrical dress with flounces, made in silver, gold and beige tones, decorated with polka dot print, masculine cut jackets with an emphasis on the waist, wide pants, which literally merged with sandals, as well as the voluminous coat with lapels and "torn" blouses, are combined with skirts midi-length.

A special place in the series of images occupy accessories. So Jonathan decided to support Tom Ford, who presented his collection of plastic tops, anatomically repeating the shape of the breast. Anderson has placed the emphasis is clearly less, but do not notice the effect of Ford's impossible. Each dress from the new collection, he decorated the signs of infinity, which became a sort of "armor" and alluded to the ephemeral nature of the fashion world.