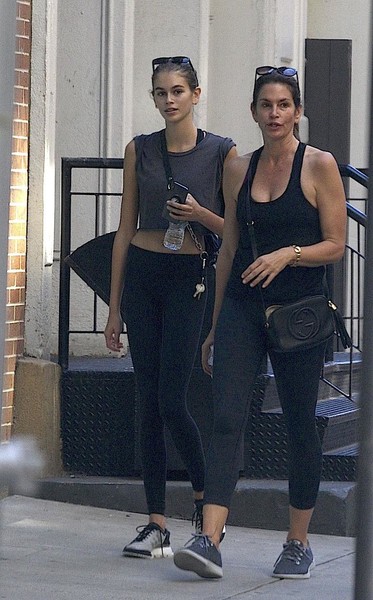 Cindy and Kaya Gerber went for a walk in a similar way.

Legendary supermodel 90s and it is now popular in the fashion industry, despite the fact, In February it struck 52 of the year. And her daughter, 17-summer Kaia Gerber, at breakneck speed wins podium behind the podium. Karl Lagerfeld himself officially referred to her as his muse.

On the days of mom and daughter could see the streets of New York in a very unusual way. Instead of designer dresses both stellar beauty dressed in dark sports leggings, simple T-shirts and sneakers. And fans have a reason to compare their figures.

Kaya two years back caught up with the growth of his famous mother. Yes, and her legs were not just a longish, and endless - the envy of all. All the same genetics - a great thing! But here's the problem - the girl is constantly blamed for anorexia. After all, these same legs more like a match. Yes and no protruding edges and bust times cause criticism of fans.

As for Cindy, it is always different appetizing forms and toned figure. No wonder she played sports video tutorials (more precisely, shaping - it was called so) millions of women around the world.

But lately Crawford beginning to take slightly. true, it is not always noticeable. More precisely say, Cindy recently shakes from side to side. She dressed like Aunt, but still show folds on already nemodelnoy waist. Then suddenly - bang - and she was invited to the fashion shoot topless, Crawford and even backstage make-up to look just gorgeous.

Even on this image, where paparazzi captured Cindy Kiai, representation of Internet users divided. some considered, that the models look like an older and a younger sister. Others dealt, Gerber is that if next to his grandmother. Others praised the feminine figure Crawford, and a fourth decided, Kaya that looks much better stellar mom. And what do you think?