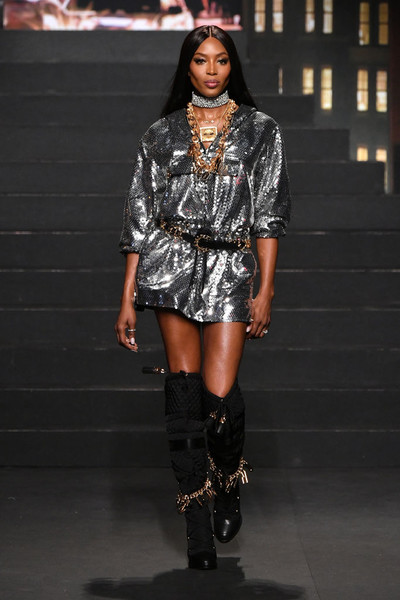 Designers have persuaded 48-year-old model to make an exception and enter the podium ...

The famous "black panther" all appear less often on the podium ... First Naomi Campbell seriously spooked fans with health problems: because of the terrible pain in the knees that almost ended up in a wheelchair. And after and absolutely I took a break and moved away from the high life.

But the beauty of days yet to make an exception ... On the show Moschino x H&M in New York Campbell not only appeared as a guest, and I came out on podium.

Naomi has appeared on the show along with other celebrities and paraded on podiyu in brilliant bomber, who belted black belt, Soldiers and big boots.

Whether bomber and earnest proved too short, whether heels - the highest, but it seems, that the legs of the British model has "grown up" at least ten cm!

Recall, the long-awaited new items - the result of joint work Moschino and H&M - will appear in stores 9 November. This time the designers have focused on Moschino suitable for bright color combinations, and added to topical silver luster and mix dark and gold, which is associated with luxury style 90th.

Not forgotten and about the image of Mickey Mouse - Disney character is celebrating this year its 90th anniversary. For more information about the collection is available here.