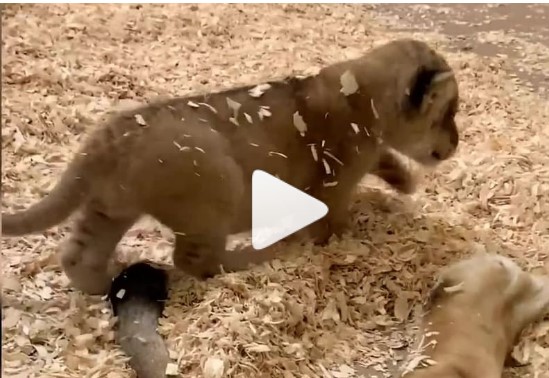 The little cub has fascinated millions of users on the network.

Recently the Denver Zoo has shared a video, where the left-dad for the first time meets his almost newborn baby. Cub was at this moment for five weeks, but before the pope to launch in the aviary to the mother and the baby can not. certainly, playing zveryata - enchanting spectacle. But in this video attracts attention time, when the Pope meets with his son. Leo - Star! On an incredibly loving and considerate.

Cub born at the Denver Zoo 25 in July and a couple of months living indoors. At first, he was there alone with my mother Neliey, then they were allowed stepsister Camara, and almost one and a half months after birth - and father of Tobias.

"Soon the baby will make its big public debut at one of the open habitats, - says the director of the zoo communications Jake Kube. - Now he is, as we expect the lion cub: playful, curious and energetic ".

Two months lion lived nameless. At this time, the zoo held in their social networks to vote on raising money for the maintenance of the lions, and the choice of the name of a new pet: Tattoo (the Swahili means "three", because it is the third calf Nelii), measure (mountain in Tanzania) or Moremi (Reserve in Botswana). Almost all the time were leading the first two. Last week, the zoo summed up: baby name tattoo.

While cub not debuting in public, Zoo publishes photos and videos with them in their social networks almost every week.

"It is important to remember, that in the past 25 years disappeared almost half of African lions, and the threat is not reduced: poaching, destruction of native habitats, etc., - says Kube. - We hope, what, see our charming cub, people will be inspired and take action, to help protect their wild counterparts and the whole nature of the world ".

Tattoo 3 of the week

Tattoo 4 of the week

Tattoo 5 weeks, The first meeting with his father